The ferry service is now closed for the winter and resumes 21st June 2021. Please see the Timetables tab for 2021 times.

WEDDING PARTY TAKES TO THE FERRY

Two ferries were put into service on Saturday 19 July 2014  looking festive with bunting, balloons and even cushions on the seats.  There was also a stock of umbrellas, just in case, however, they weren't needed.  The sun shone on the beautiful bride and groom, with their attractive bridesmaids all in cream.  The ferries transported nearly 80 guests from Appledore to Instow for their reception at Tapeley Park to the enjoyment of locals and visitors on the Appledore Quay.

The ferry was used by an ITV camera crew to film Dan the Fishman in the estuary being interviewed and bringing up a lobster pot.  He was then filmed cooking the lobster on the quay and sitting eating it and drinking champagne.  The filming should show the beauty of the estuary, Appledore and Instow.  You can still see the programme on ITV Player! 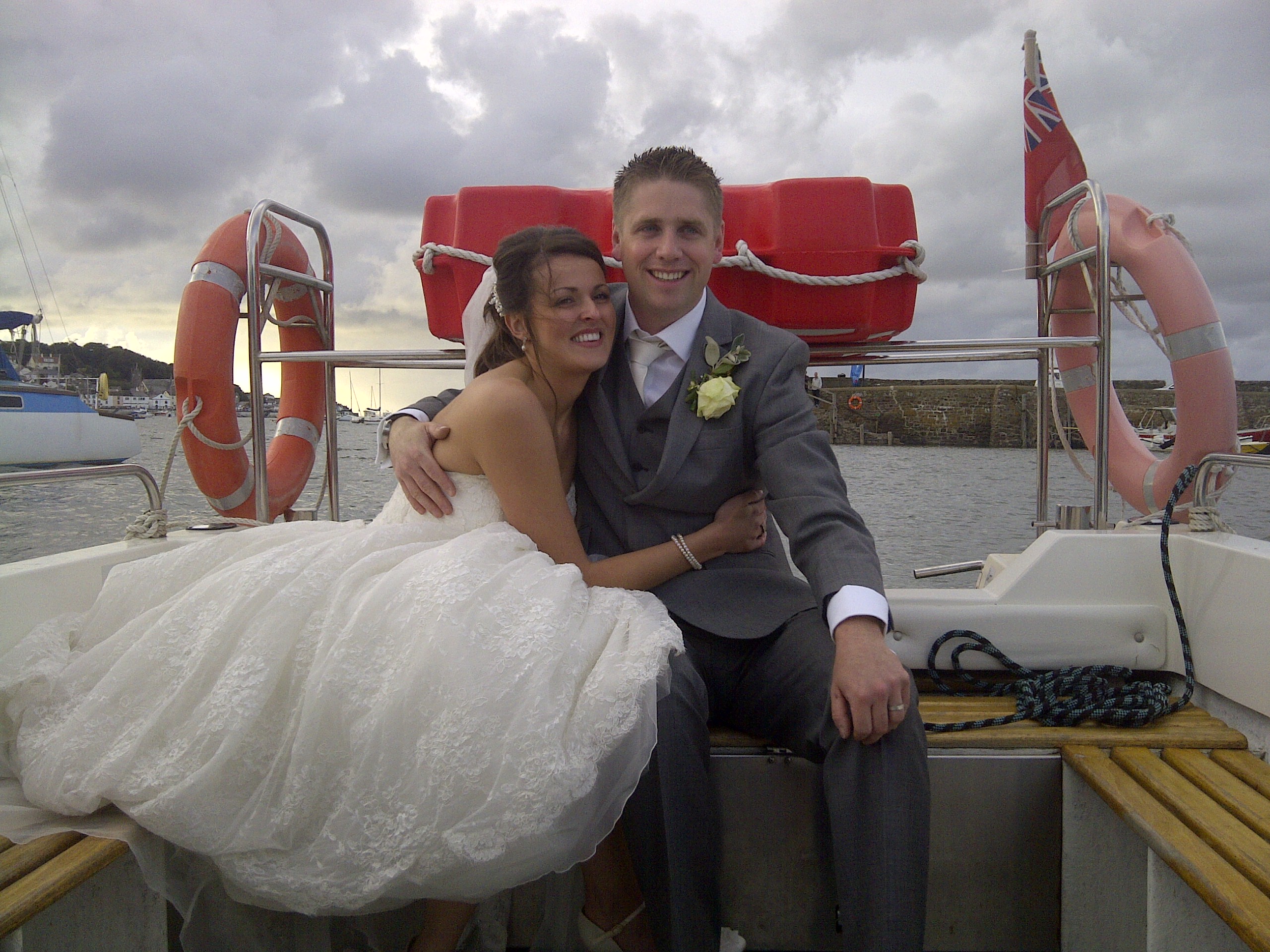 On 7 September 2013, local couple Darren Greener and Chloe Holding married then boarded our ferry Misty Blue for a honeymoon cruise – from Instow Quay to the North Devon Yacht Club and back! Darren and Chloe then joined their guests in the Yacht Club for their reception. 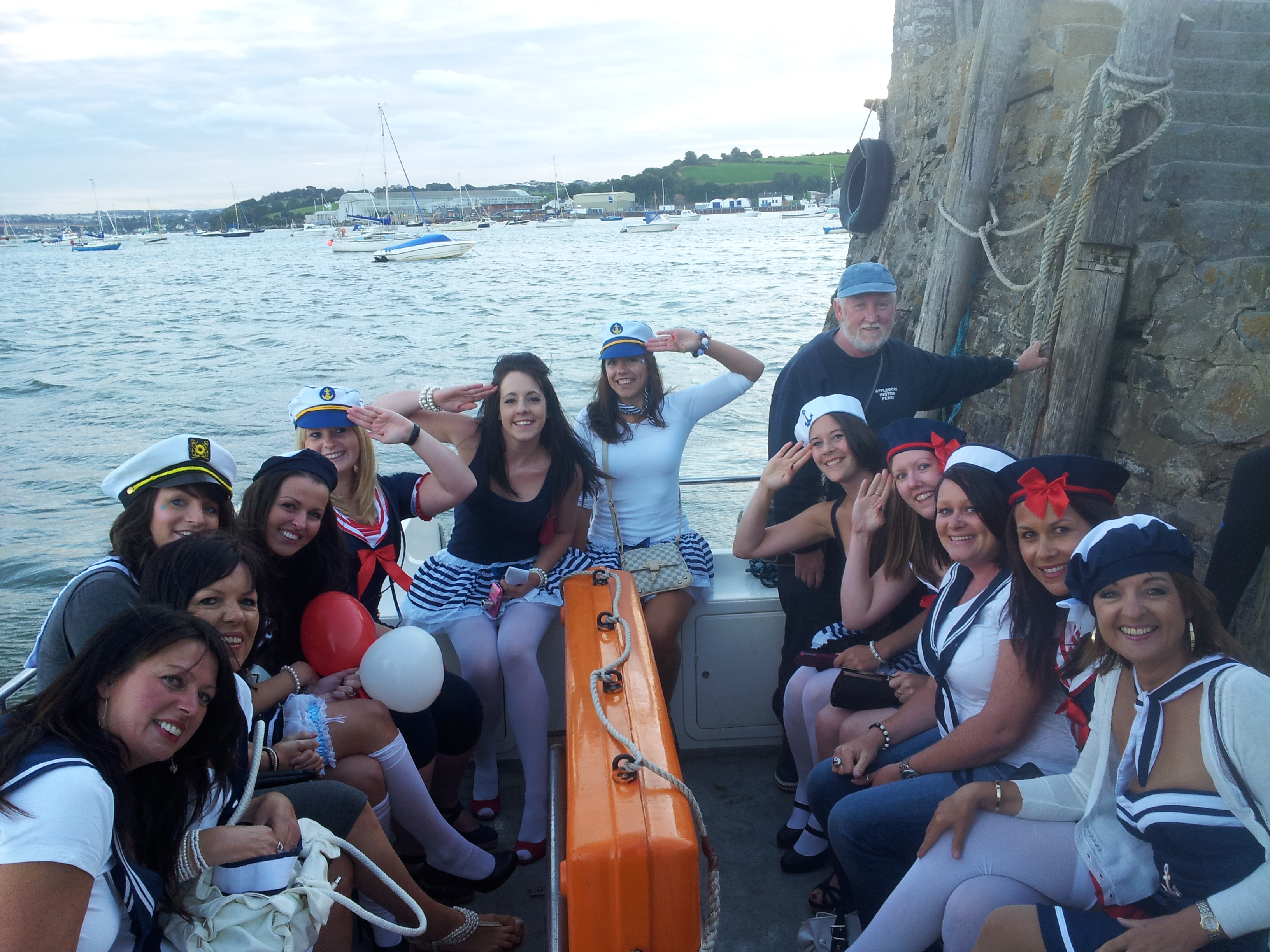 The second photo here is of Chloe and her friends two weeks earlier when they were out for the evening for their hen party. They joined us on a trip across the Torridge from Appledore to Instow – as you can see, suitably dressed for the occasion! 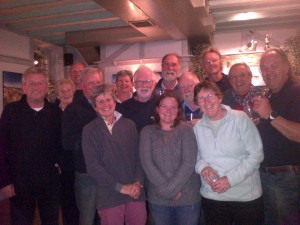 The final day in 2012 for the Appledore Instow Ferry was wet and windy, very much like most of the summer. However despite the elements being against us we had a fantastic season and we passed all of our targets with ease. The totals for the year were: 15,239 passengers, 441 dogs, 201 bikes. This achievement is due to the dedication and support of our volunteers and skippers who worked through some awful weather plus the few days of summer. We believe we have brought the communities of Appledore and Instow together and provided a service that has benefited local businesses, walkers and cyclists on the South West Coast Path, holiday makers and of course local people.  The picture shows some of the volunteers at the Wayfarer Inn after the last shift. 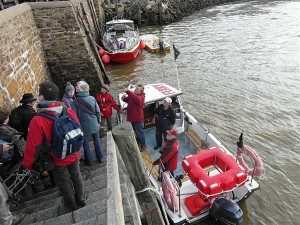 3 October saw the return of Professor Mark Horton from the BBC Coast Programme visiting Instow and Appledore.  He booked a ferry trip with his university students to view the Appledore Shipyard and Richmond Docks.

Wednesday 1 August saw the World Crabbing contest take place on Appledore Quay. Click on the picture and it shows Rory McGrath who had just dropped a crab from his net. The Ferry is bringing passengers from Instow to watch the competition. 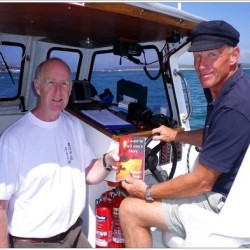 Photo shows Devon Author Richard Small presenting a copy of his new book to the Appledore Instow Ferry. The book and the ferry have similarities, one transports you pleasantly and safely across a tidal river and the other transports you safely and pleasantly to another time and place. For details of his latest book visit Richard's web site at www.goodshortstories.net. 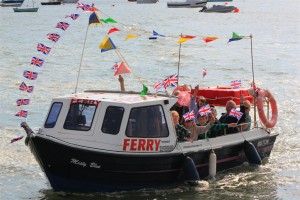 The reinstated Appledore Instow Ferry reached its first anniversary on 25 June 2012. It was a year ago that the first launch took place and since then the ferry team of willing volunteers and skippers has worked to provide a professional and reliable service between the two villages with only the bad weather causing a few missed days. With support from many sources including the lottery, local businesses and individuals we have achieved an astounding result of carrying just over 12,500 passengers in our first year. This is far beyond the expectations of anyone when we started and feedback from local people, holiday makers and messages posted to us on the web and Facebook all indicate the ferry is a much need resource for the two villages and has certainly brought the two communities of Appledore and Instow together. We hope to build on this success and look forward to seeing you on the ferry this year.

Well the first 2 months of our season has passed and what a fantastic start to the ferrying season. The new engine is perfect, smooth, quiet and powerful. The boat is looking good after the work over the winter. Our volunteers are back with us for another season and the weather has been reasonable so far with only a few days lost to high winds. In April we took 1300 passengers, the most travelling over the Easter week. In May we had just over 1500 passengers crossing the river. The first of the school trips took place with 30 pupils from Appledore school using the ferry all wearing lifejackets and having a great time.  June has now started with a fantastic day on June 4 with celebrations on Instow beach and the pictures tell the story of a record breaking 258 passengers taking the ferry in the evening

I am delighted to tell you that we have been successful with our application for the Village SOS Big Lottery funding programme. We have been selected as the lead South West project and have been awarded a conditional funding offer of £30,000. This will help us consolidate the provision of the service for the future and covers the purchase of a second vessel plus other essential equipment.  Ferry operations have started and although its evening tides over Easter we are already busy taking more than 200 passengers on our first two days. Hope to see you on board in the near future.

Click on the logo to go to the sponsor's web site. 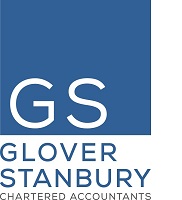 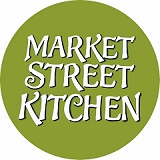